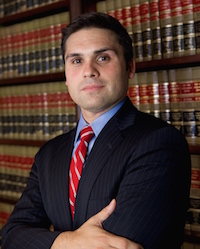 Zachary joined Giampa Law as a paralegal in 2002. While Mr. Giampa completed his schooling, he continued to work with the law firm and follow in the footsteps of his father, Senior Partner, Richard L. Giampa, Esq. Upon graduation from law school, Zachary immediately began his career as a practicing lawyer at Giampa Law. He concentrates his legal practice on cases concerning personal injury, medical malpractice and worksite liability.

In recognition for his outstanding legal work, Mr. Giampa, was recently selected as a "Rising Star" by Super Lawyers in 2014, 2015 and 2016. Mr. Giampa's jury verdicts are regularly reported in the Jury Verdict Review & Analysis reporter.

Mr. Giampa received his Bachelor's degree in Business Administration from Loyola University Maryland and his law degree from St. John's School of Law. While at St. John's, Zachary was an active member of the Polestino Trial Advocacy Institute.

Additionally, Mr. Giampa maintains a practice in criminal law and is an active member of the (18b) Assigned Counsel Plan for the First Department of the State of New York.