Bronx NY Lawyer Who Knows How To Win 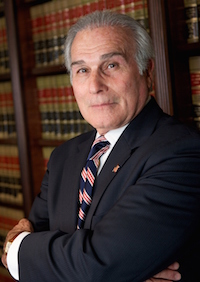 With over 35 years practicing law in both State and Federal Courts, Richard L. Giampa has made his mark as a leading trial attorney in the civil and criminal arenas. The founder of Giampa Law, Mr. Giampa has been touted by many legal professionals as one of the top trial lawyers in the State of New York.

Mr. Giampa began his career as a prosecutor in the Bronx County District Attorney's homicide bureau, where he honed the trial skills that would become his hallmark. From there, he founded Giampa Law, where he concentrates his practice on helping injured persons and defending those accused with criminal conduct. Through his storied career, Mr. Giampa has been counsel in several high profile cases and has received very favorable verdicts for his clients. He considers his practice to be dedicated to his clients and the United States Constitution.

Mr. Giampa focuses his law practice predominantly in the New York metropolitan area, including all 5 boroughs and surrounding counties. Having maintained offices in Manhattan and Westchester County for the first 20 years of his private practice, sometimes in conjunction with attorney colleagues, he now maintains offices in both Bronx County and Westchester County. He still carries on a busy trial schedule in all 5 boroughs and surrounding counties, including upstate courts between White Plains and Albany. He now enjoys practicing law with his son and partner, Zachary Giampa and associates. Mr. Giampa receives referrals from numerous prominent law firms in New York State and continues to practice in association with other firms in many states throughout the East Coast, from New Jersey to Florida.

With over 35 years of legal experience, Mr. Giampa has a thorough grasp of the nuances of complex legal issues, a masterful understanding of the rules of evidence and the ability to translate complicated information into clear terms for a jury. His application of these skills in the courtroom has left an indelible impression on all those who have witnessed him on trial - including defendants' medical experts whom he has cross-examined. In addition to his skills as a trial lawyer, Mr. Giampa has successfully argued appellate cases before the New York Supreme Court First and Second Department Appellate Divisions and the United States Court of Appeals for the Second and Sixth Circuit. Mr. Giampa's practice has also engaged in petitioning the United States Supreme Court.

Richard's experience and legal expertise has also been requested outside the courtroom. He has appeared as a legal expert for several New York news stations and has been highlighted as a key speaker in the field of personal injury law for the Business Leader Spotlight. Richard also gives back to the legal community by donating his time as a judge for the mock trial competitions at St. John's School of Law.

A New York resident since birth, he received his Bachelor of Arts degree from the University of Connecticut, which he attended on a wrestling scholarship. He went to law school at Cumberland School of Law at Samford University and received his Juris Doctorate in 1975. The following year, he attended New York University Law School as a matriculating LLM candidate in criminal justice, which was interrupted by his appointment as an Assistant District Attorney by Mario Merola, the Bronx District Attorney. Mr. Giampa originally served in the Supreme Court Trial Bureau where he was counsel to the District Attorney in the first New York State FALN prosecution; he then was appointed to the Homicide Bureau where, among other cases, he prosecuted to conviction the Laurelard Cigarette heir for killing his wife and claiming an insanity defense.

Mr. Giampa resigned from the District Attorney's office in 1980 and immediately went on to private criminal defense practice after refusing to prosecute a homicide case that relied upon statements procured by police hypnosis. When senior attorneys substituted for Mr. Giampa obtained a conviction using the statements, the New York State Court of Appeals reversed the conviction, vindicating Mr. Giampa's refusal to prosecute and establishing a landmark decision that precluded all statements procured by hypnotic suggestion as inadmissible (that law still stands today).