Home » Blog » How Prevalent Are Elevator Accidents in the Construction Industry?

How Prevalent Are Elevator Accidents in the Construction Industry? 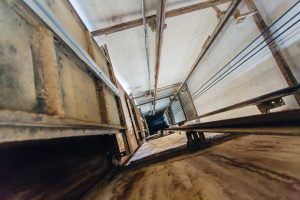 Any job working from heights is bound to be a dangerous one. In order to prevent devastating injuries or death, workers and their employers must follow strict guidelines.

Falls from elevator shafts are particularly common in the construction industry. In its latest Quarterly Data Report, the Center for Construction Research and Training (CPWR) reported a steady increase in elevator-related construction fatalities from 2003-2016. While the numbers fluctuated from one year to the next, 2003 saw a total of 14 deaths, but 2015 had the highest number of deaths during that period at 37, with a significant dip in 2016 at 28.

The report focused primarily on data from 2011-2016, when 286 elevator-related deaths occurred across several industries. Approximately 145 of them occurred in the construction industry, with falls to lower levels being the leading cause of death. Workers responsible for installing and/or repairing elevators were the most likely to fall.

Among falls to lower levels:

Nonfatal elevator-related injuries have declined from 380 (in 2003) to 280 (in 2016), with a significant spike of 920 injuries in 2012. Approximately 2,410 injuries occurred between 2011-2016, with about 46 percent requiring at least 31 days of time away from work for recovery. Most injuries occurred among electrical and wiring contractors (780 incidents) and electricians (700 incidents).

Workers who survived elevator accidents were most likely to sustain injuries from trauma or other disorders (27 percent), bruises and contusions (22 percent), broken bones (about 19 percent), and sprains, strains, and tears (nearly 19 percent).

Recovering from these injuries could require X-rays, surgery, pain and inflammation medication, and months of physical therapy. If you’ve been hurt on the job, you may be entitled to compensation for damages in addition to collecting workers’ compensation.

An experienced construction accident attorney can sit down with you and discuss your legal options. Perhaps a third party was responsible for your accident. This may include a manufacturer of equipment or materials, or another company involved in work site.

To learn more, contact us to set up your free consultation.