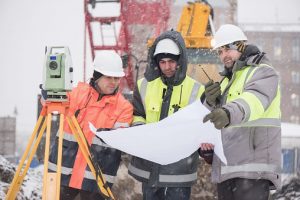 Winters in New York City are notorious for being tough, but the city's construction workers have braved the cold conditions for generations to build the city we call home. That being said, the winter weather adds to the risks that construction workers everywhere face, requiring additional seasonal awareness. EHS Today suggests that to improve site safety, there should be established and reinforced protocols that engage every employee at the organization, from management to the on site workers.

Everyone who has experienced winter in the Northeast knows the common hazards that appear with the first cold front: ice, snow, and cold. Ice and snow present the most visible risk to construction workers, as buildups of either in walkways can make walking difficult. Many sites have processes to remove ice and snow from work spaces; often overlooked, however, are the parking and break areas. Workers can suffer injuries from slipping and falling while simply trying to get to and from their cars or while taking breaks. If ice and snow exists in these areas, then signs should be in place to warn workers of these hazards until they are removed. If they are present, employees should exercise caution to maintain balance and avoid carrying heavy objects through these areas. Slips, trips and falls accounted for 800 workplace fatalities in 2015, according to the Bureau of Labor Statistics.

Hypothermia and frostbite present a less visible risk than slipping on ice but can potentially be just as hazardous. When temperatures reach below freezing, such as during the recent "bomb cyclone," unprepared workers are at an increased risk for hypothermia and frostbite. When working in these temperatures, it is important to be aware and remain on the lookout for their symptoms to prevent injury.

Symptoms of hypothermia can resemble the side effects of alcohol, further adding to the risk when in a construction site. These symptoms include:

Frostbite is often portrayed in media as appendages turning black, but early symptoms include:

When experiencing these symptoms or when observing them on a coworker, it is important to get to a warm location, remove wet clothes, and add layers to the affected areas to prevent further heat loss and avoid extensive harm. The affected worker should then seek further medical treatment.

What employers should do

Employers in New York City should have protocols in place to keep everyone safe during the winter months. It is equally important for employees to be engaged in these protocols so that they remain effective. A 2016 Gallup poll showed that workplaces with high levels of employee engagement had 70 percent fewer incidents. Employee engagement is increased when employers have effective communication channels in place that encourage input from the bottom up and management takes into consideration the feedback they receive from those working in the field.

If you have sustained a winter-related injury due to negligence, it is important that you speak with an experienced New York construction accident attorney at Giampa Law.