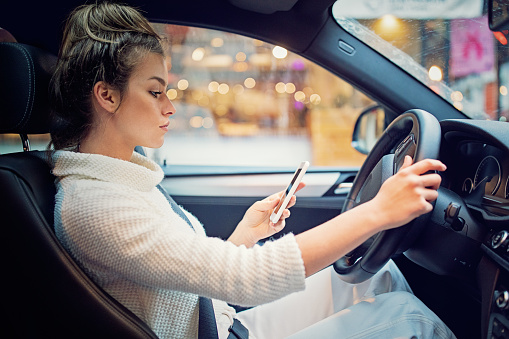 Texting and driving accidents can be prevented if states adopt tougher laws prohibiting drivers from using a cellphone, according to a recent traffic safety study conducted by the Insurance Institute for Highway Safety (IIHS).

"Our findings suggest that other states could benefit from adopting broader laws against cellphone use while driving, but more research is needed to determine the combination of wording and penalties that is most effective," said Ian Reagan, a senior research scientist at the IIHS.

Since then, distracted driving accidents and rear-end accidents have decreased dramatically in Oregon and Washington but remained relatively the same in California. In addition, IIHS researchers examined the number of rear-end crashes since research has found that such accidents often involve cellphone use more than other types of collisions.

As for why California did not experience similar reductions in the number of car accidents, researchers believe that because the state's cellphone laws allow drivers to hold a phone while driving, police officers may have been confused about how to enforce such laws.

New York has such strict laws since state officials have said that distracted driving, especially texting while driving, has become the leading contributing factor to motor vehicle collisions in the state, according to the Governor's Traffic Safety Committee.

How a Bronx car accident attorney can help

Car accidents caused by texting drivers in New York might seem straightforward. The driver who caused your collision clearly broke the law and crashed into your vehicle. But unfortunately, many accidents involving texting drivers quickly become very complicated legal cases. That's because the texting driver often denies using their phone and may take steps to prevent investigators from seeing their cellphone records.

At Giampa Law, our Bronx car accident lawyers know how to handle complicated legal cases. We can demand to see the at-fault driver's cellphone records and conduct an in-depth investigation into your crash.

Our experienced legal team knows what evidence to look for and how to build a strong case based on facts. That's why we have such a strong track record of success.

In addition, we handle injury claims on a contingency fee basis. That means you pay no fees unless we obtain a financial settlement or verdict for you.

Discover what we can do for you. Contact our law firm and schedule a free consultation.