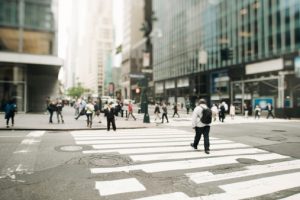 In a disturbing trend nationwide, pedestrian fatalities are rising. They have risen 46 percent since 2009 and look to be an emerging public health crisis. This rate outpaces the growth of another trend, which is the growth of overall traffic deaths. In 2016, there were nearly 6,000 pedestrian deaths, more than the total amount of American fatalities in the Iraq war since 2003.

There have been a handful of potential culprits for the rise in pedestrian deaths. Distracted driving has also been on the rise over a similar time period. Marijuana legalization and increased levels of pedestrians walking and texting have also been suggested as possible factors in the increase. The increased prevalence of SUVs might explain why more of these collisions result in deaths. SUVs have overtaken smaller passenger vehicles in terms of new vehicle sales, sparking auto makers to switch their focus to them. Because SUVs sit higher off the ground, the theory is that pedestrians are more likely to go under the vehicle than over and are more likely to die as a result.

New York City, fortunately, is bucking this nationwide trend. In the city, pedestrian deaths have decreased by 45 percent since 2014 under Mayor Bill de Blasio (D). That was the start of the policy known as Vision Zero, which is a citywide effort to reduce pedestrian injuries and fatalities. This is being done through infrastructure improvements, law enforcement, and professional driver training (taxis, delivery vehicles, etc.).

Vision Zero is a successful small-scale example of how the nation could possibly reverse the current trend. When first implementing the plan, the city discovered that 10 percent of streets accounted for 50 percent of pedestrian deaths. This allowed the city to focus its engineering efforts, and the results have been positive. In 2013, 184 pedestrians were killed; in 2017, that number was 101. That's the lowest level since the city started tracking pedestrian fatalities in 1910. The largest success of the program may be on Queens Boulevard, nicknamed the Boulevard of Death. From 1990 - 2014, there were 138 pedestrian deaths out of 185 total deaths. In 2015 and 2016, there were none.

The streets of New York City are getting safer for pedestrians, but the risk still exists. Knowing what to do after a pedestrian accident in the Bronx or another borough can be confusing. That's especially true if you or a loved one was injured in a pedestrian accident and had to be immediately transported to a hospital for emergency medical treatment. Due to your injuries, you might not have been able to get important information you need about the driver immediately after your accident. Don't leave your future to chance. Take action. Contact Giampa Law.