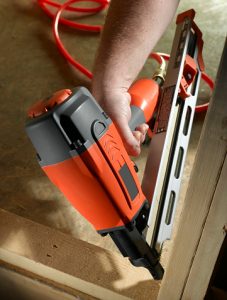 On modern construction sites, classic claw hammers have largely been replaced by nail guns for most wood frame construction tasks. It's easy to see why. Nail guns are powerful and easy to use, which means nailing tasks can be completed much more efficiently and accurately.

Unfortunately, they're also dangerous and cause thousands of injuries every year. According to the Centers for Disease Control and Prevention, nail gun accidents result in an estimated 37,000 emergency room visits nationwide every year. And while that figure does include some consumers, more than two thirds of those injuries are sustained by residential carpenters and other construction workers.

How do nail gun accidents happen? The CDC has identified seven main risk factors that lead to nail gun injuries:

Nail gun injuries often occur on construction sites in New York and nationwide. According to the Occupational Safety and Health Administration (OSHA), 40 percent of residential carpenter apprentices experienced at least one nail gun injury over a period of four years. Moreover, nail guns account for 15 percent of hospitalizations due to contact injuries on construction sites, according to a study published in the Journal of Safety Research - more than any other type of tool-related injury. Given that nail guns are only used in wood-frame construction and not on all construction sites, such statistics illustrate just how dangerous nail guns can be in the workplace.

Accidents involving nail guns often lead to severe injuries requiring surgery and other medical treatment. In one case earlier this year, the New York Daily News reported that a carpenter's apprentice shot himself in the knee twice with a nail gun. Miraculously, he missed all of the bones in his knee and escaped serious injury - but the surgery to remove the nails cost over $35,000. And such costs do not include lost income and other expenses while the injured worker was recuperating.

That story was a best-case scenario. Many injured workers aren't so lucky. Most nail gun accidents cause injuries to the hands or fingers, which can lead to long periods of time away from work for people who work with their hands. And when a nail penetrates the chest, head or another vital part of the body, more serious injuries and even fatalities can occur.

In many cases, workers injured in a nail gun accident are victims of someone else's negligence. Often, the person struck by a nail is a coworker or bystander rather than the nail gun operator. And even when the operator is injured, the accident may be a result of a defect in the nail gun itself - for instance, if the gun fires twice when the trigger is only pressed once - rather than a mistake on the worker's part.

When an accident is caused by someone other than the worker or his or her employer, the injured worker has the right to pursue compensation from the negligent party in addition to claiming workers' compensation benefits. Such third-party workplace accidents often occur due to mistakes made by a contractor, subcontractor, someone visiting the construction site or a tool manufacturer. In such cases, injured workers may be able to receive compensation for injuries and expenses not covered by workers' compensation, such as pain and suffering. Taking legal action against a negligent third-party also sends a strong message to tool manufacturers and contractors that they need to be more mindful of worker safety.

These types of accidents can be very complicated legal cases. That's why we strongly advise construction workers injured in nail gun accidents to contact an accident attorney at Giampa Law.  We have decades of experience representing hardworking New Yorkers hurt on the job. We know how the legal system works and we have the results to prove it. Contact our law firm and schedule your free case evaluation right now. Giampa Law proudly serves injured construction workers in the Bronx and throughout the greater New York area.