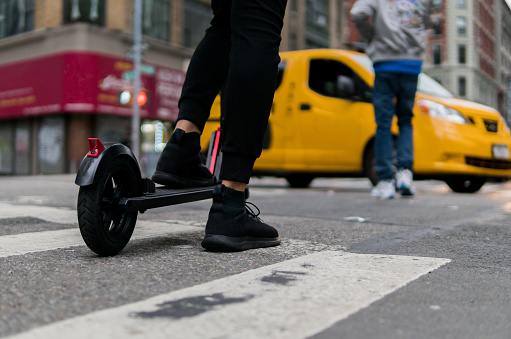 The recent death of a 65-year-old actress in an Upper West Side e-scooter hit-and-run has New York lawmakers calling for tougher penalties for negligent scooter riders.

Lisa Banes, who played Marybeth Elliot in "Gone Girl," died in early June 2021 after she was struck by a man on a black and red e-scooter while crossing the street. The fatal accident happened around 7:30 p.m. at the intersection of West 64th Street and Amsterdam Avenue. The man on the scooter fled the scene, according to The New York Post. Banes, of L.A., reportedly had the right-of-way leading up to the pedestrian accident.

In critical condition, Banes was transported to St. Luke's Hospital with severe head trauma. She later died from the injuries.

Police are searching for the suspect who hit Banes, but it doesn't seem like the person will face serious criminal charges.

A fatal car v. pedestrian hit-and-run is a felony in New York City. For people on e-scooters, it's just a misdemeanor.

Soon after Banes' death, a couple of lawmakers made a public call for harsher scooter penalties.

New York State Sen. Brad Hoylman and Assemblywoman Linda Rosenthal say city laws have not kept up with the rise in e-scooter popularity and related accidents. The use of e-scooters has exploded since 2018, especially in U.S. metros. Feuling the trend, in part, are bikeshares that offer motorized bicycles and scooters.

In 2018, people made about 38.5 million trips on shared e-scooters in major American cities.

Since 2020, there have been nearly 600 e-scooter accidents in NYC, according to an ABC 7 investigation. About 540 of those accidents resulted in injury and three pedestrians have died in e-scooter crashes.

What are NYC's e-scooter rules?

E-scooters move fast, but they don't play by the same rules as other motor-powered vehicles on New York's streets. NYC laws regarding e-scooters include:

Pedestrians already have a lot to look out for when walking NYC's streets with motorcycles, cars, trucks, bicycles, and thousands of other people on foot. Pedestrians can be injured by:

So far this year, there have been more than 3,100 pedestrian accidents citywide. About 580 of these accidents took place in The Bronx — 110 involved e-scooters or -bikes.

If you were injured or a loved one died in an accident with a reckless e-scooter rider in the Bronx or anywhere in the City, a lawyer can protect your rights and help you recover the compensation you deserve.

Giampa Law gets justice for injured pedestrians. Located in The Bronx by Yankee Stadium, our law firm has more than 30 years of experience with liability law and the NYC justice system. In fact, our firm recently secured a $1.5 million verdict for a pedestrian injured in a Bronx accident.

To learn more about your legal rights and options, contact us today for a free consultation.