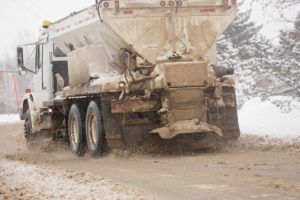 We see them all over the streets of the Bronx and throughout New York City. Garbage trucks, sand spreaders, dump trucks and other industrial vehicles. They are often known for causing accidents with smaller passenger vehicles, pedestrians, and bicycles – especially during the nighttime hours.

Service vehicle accidents often happen when drivers are inexperienced, inattentive, impaired by alcohol or drugs, driving recklessly, or drowsy. Due to the size and weight of many service vehicles, they can inflict serious harm to other road users in a crash.

NBC New York reported that in January, a woman was killed after being struck by a sanitation truck spreading sand on the street. The accident happened in the Bronx when the truck made a left turn onto northbound Willis Avenue. After hitting the woman, the driver took off. After the incident, the driver of the truck was suspended by the City of New York Department of Sanitation (DSNY).

“We are cooperating fully with the police investigation. The Sanitation Worker involved has been suspended. Additionally, DSNY safety personnel are also conducting an investigation,” the DSNY said in a statement.

After an investigation, the company was found to have a record of previous safety violations. The company’s license was suspended after a thorough audit and inspection – during which an employee who wasn’t authorized to operate a garbage truck was found driving while other trash workers were on break.

Filing a claim after a service truck accident

After filing a notice of claim, it’s critical that you consult with an experienced truck accident attorney who can handle the rest. The legal team at Giampa Law knows how to handle all types of service vehicle accidents and get results.

If you or a loved one was injured in any kind of traffic accident, contact us to discuss your legal options.