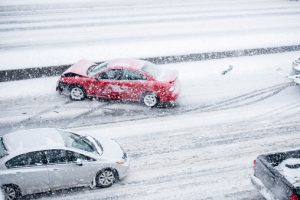 Winter in the Bronx and throughout New York City can be brutal. Snow, sleet, and freezing rain can hinder your travel plans or significantly increase your commute time. In most cases, navigating wintery roads takes significant caution.

According to the U.S. Department of Transportation Federal Highway Administration (FHWA), roughly 24 percent of weather-related auto accidents happen when roads are affected by snow, slush, or ice. This results in more than 1,300 traffic fatalities and 116,800 injuries in the US each year.

About 15 percent of accidents happen while snow or sleet is falling. This results in roughly 900 fatalities and 76,000 injuries nationwide each year.

Winter driving isn’t just about watching out for those slick spots in the road. Drivers should watch out for other hazards such as:

Not all drivers are responsible

When the road is affected by snow and ice, drivers have less friction to reduce their speed or come to a complete stop. The FHWA notes that freeway speeds are often reduced by 3 to 13 percent on roads affected by light snow. When roads are affected by heavy snow, freeway speed is reduced by 5 to 40 percent. Whether you are driving on the freeway or on a city street, it’s best to adjust to the conditions.

According to the National Safety Council, drivers should do the following when winter weather strikes:

However, not everybody on the road is as responsible. We have all seen those drivers who completely disregard the weather conditions. They might exceed the speed limit or tailgate other vehicles. Moreover, they may be aware of the risks they take, but may have been doing it for years without any issues. These are the drivers you must watch out for when taking to the roads this time of year.

If you were injured in an auto accident because of someone else’s negligence, don’t hesitate to speak to an attorney. At Giampa Law, we understand how devastating and frustrating a winter- weather-related crash can be. We are dedicated to fighting for the rights of injured motorists in the Bronx and throughout New York City. Contact us today to find out how we can help you.