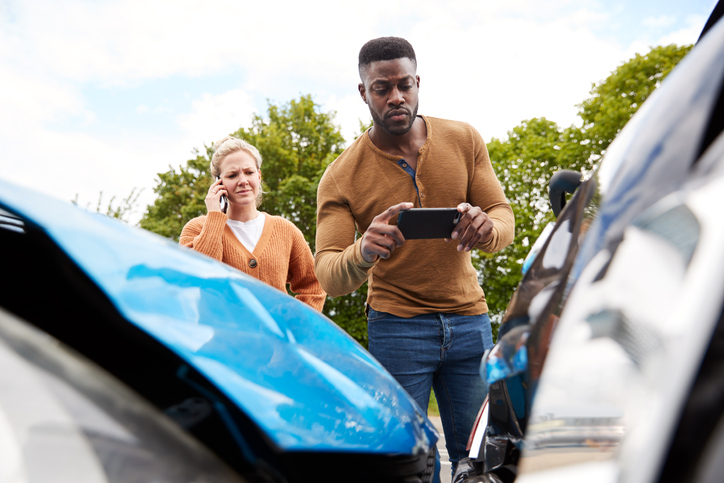 A serious, multi-vehicle, chain-reaction car accident involving a public NYC bus recently sent at least 13 people to the hospital, including one person who was critically hurt.

The accident happened on Jerome Avenue in the Bronx's Norwood neighborhood, around 11 a.m., on a Thursday in late July.

New York City Police say that the pile-up started when a 20-year-old man driving a Chevrolet Equinox attempted to change lanes and collided with a Toyota Rav-4. The impact propelled the Toyota into an oncoming, in-service Bee-Line bus. The bus then slammed into a steel support column outside Woodlawn station.

Among those transported to Jacobi Hospital were 12 bus passengers with non-life-threatening injuries and one 69-year-old man with "severe trauma to the head," Norwood News reports. Video of the accident spread quickly on Citizen App. Several local news stations picked up the story and included surveillance video with their reports.

While this devastating crash rightfully received a lot of local attention, it's worth remembering that a car accident happens in New York City once every 2.3 minutes. This is the city that never sleeps, and the traffic that drivers endure here is unrivaled. You've got to keep an eye out and drive defensively in NYC, but even the best driver can get rear-ended or T-boned by someone else who isn't driving responsibly.

What to do after a NYC car accident

Most people don't instinctively know what to do after a bad car accident, but it does help to be prepared. If you drive, you should know what to do after a crash to make sure you're in the best position to protect your health and legal rights. If you've already been in an accident, there are still things you can do to improve your chances of getting compensation for your damages (accident-related expenses).

Giampa Law fights for crash victims in the Bronx & NYC

Our law firm has the knowledge and experience to help you maximize the value of your claim. We've been a staple in NYC for more than 30 years and take pride in fighting for the rights of injured New Yorkers. If you were injured or a loved one died in an accident, contact us today to schedule a free case evaluation. We're located in the Bronx right near Yankee Stadium and Supreme Court of Bronx County. If you can't come to us, we can also come to you—whatever works best for you.