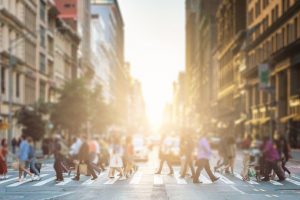 New York City is one of the most pedestrian-friendly places in the United States. In fact, many residents prefer to walk rather than drive here.

If you were injured or lost a loved one in a pedestrian accident, an attorney at Giampa Law can help you build a solid claim.

How distracted are pedestrians in New York City?

In response to the growing number of pedestrian deaths, much of the blame has been placed on distracted walkers. However, the facts don’t support such claims. A new study by a group of Northern Arizona University engineering professors – published in Transportation Research Records – says otherwise.

The study examined the behavior of 3,038 crosswalk users in New York City and Flagstaff, Arizona and found that 86.5 percent didn’t appear to be distracted. Those who did appear distracted were:

Additionally, the majority of the pedestrians observed didn’t commit any violations that could contribute to an accident. Only 16 percent of pedestrians walked outside the crosswalk and just 23 percent crossed without a “Walk” signal.

While municipalities place too much emphasis on distracted walking, distracted driving continues to be a growing danger to pedestrians. According to the Centers for Disease Control and Prevention (CDC), roughly nine people are killed and more than 1,000 are injured every day in the United States. Other factors in pedestrian deaths include drunk driving, aggressive driving, and speeding.

Locally, a pedestrian was killed while crossing the street outside Jacobi Medical Center in the Bronx. The driver who hit him was previously involved in an accident with another vehicle. As she tried to leave the scene of the crash, the vehicle followed. As she attempted to get away, she struck and killed a 57-year-old man.

Negligent driving is the primary cause of pedestrian accidents

New York City is the country’s largest city with numerous pedestrians at just about every crosswalk. Drivers must uphold their duty of care, reduce their speed and be prepared to stop.

If you have been injured in a pedestrian accident in New York, don’t hesitate to contact our law office for a free consultation. We fight to hold negligent drivers accountable for their actions.