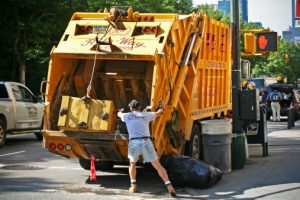 New York City is a massive city, boasting a population of over 8.5 million people in an area of 304.6 square miles. It comes as no surprise that such a large city produces a lot of trash, enough to support 20 companies dedicated to commercial trash pick-up. The Department of Sanitation handles residential waste.

Due to the client-based nature of commercial trash pick-up, routes can be long and winding across the city. This increased mileage increases the chances of being in an accident, and it's a problem New York City is attempting to address.

Over the past 2 years, crashes involving commercial garbage trucks doubled from the previous two-year period. From March 2016 to March 2018, there were 67 crashes and 5 fatalities. The period from March 2014 to 2016 saw 35 crashes and 2 fatalities. Since 2010, 43 people have been killed in accidents involving commercial trucks. This increase has drawn more attention to the issue, especially when compared to the data involving residential garbage trucks, which have had zero fatalities since 2014. This difference in crash rates and spikes over the past 2 years have created a new sense of urgency in addressing the issue.

The Transform Don't Trash Coalition has advocated for reform that addresses the issue and improves working conditions for commercial truck drivers. The routes for private companies have been described as "long" and "exhausting," a result of the increased mileage associated with having clients peppered across the city. Advocates have called for a zone-based system to address this, which entails limiting companies to competing for clients within certain zones of the city and selecting companies based on their safety record.

Mayor Bill de Blasio (D) announced his administration's intent to implement a zone-based system based on suggestions from the Transform Don't Trash Coalition, which are also similar to the systems in other large cities like San Francisco, Los Angeles, and Seattle. New York City has a crash rate that is three times higher per driver than these cities and vehicles fail safety inspections at twice the rate. It's predicted that these reforms could reduce commercial truck mileage by 49 percent to 68 percent, which would reduce the likelihood of a crash occurring, reduce emissions, and improves working conditions.

Commercial vehicle accidents can be far more complex than passenger vehicle accidents. There are usually more parties involved such as the driver's company, other companies, the trucking company's insurance, and even other motorists. A highly skilled commercial vehicle accident attorney at Giampa Law will pursue your case. With decades of experience and knowledge of New York's legal system, we know how to handle the most complex cases. Contact us today.