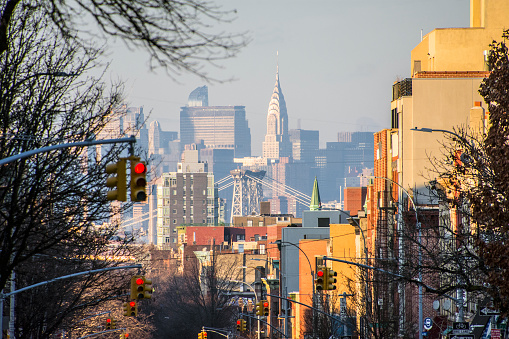 Despite a large decrease in total incidents, New York is still among the states with the most red-light running fatal accidents in the U.S.

A new study by the National Coalition for Safer Roads maps deadly red-light running accidents across the country and ranks states by their total number of accident-related deaths.

New York City has been grappling with a red-light running problem for decades. New York became the first state in the nation to start a Red Light Camera Program that uses automated traffic enforcement to deter violations.

Launched in the 1990s, the program has been extended eight times. The state's Department of Transportation says light-running at intersections with red-light cameras is down 80%. But the cameras didn't do all that on their own, the DOT says. Other measures such as automated speed limit enforcement and street improvement projects have helped reduce red-light running car accidents.

The traffic cameras and other safety improvements are bringing down the severity of car accidents too. Serious injuries at intersections with red-light cameras are down by nearly 60%.

While accidents are down, they still do happen—often due to inattentive and negligent drivers.

Red light cameras are on 233 traffic lights across New York City. The way the law is written, only 150 of them are operable at any one time. However, a camera doesn't have to be on to be effective. City officials say "dummy" cameras are also effective at deterring red-light running.

Here's how many cameras are in each borough, according to city data:

The cameras capture footage of vehicles at intersections, and later that video is analyzed for violations. If someone appears to have broken a traffic law, a ticket is issued. In 2019, the Red Light Camera program issued almost 431,500 violation tickets, the city says. Less than 3% of the tickets were challenged and 0.3% (1,230) of those challenges were successful.

NYC officials also maintain a public "crash map" that shows locations of the most recent, serious, fatal red-light running crashes as well as other traffic accidents. Among the intersections on the map are:

Profile of a red-light runner

There are some common factors that encourage a person to run a red light and risk causing a serious accident, according to a unique AAA study that draws a profile of the average red-light runner. To get their answers, AAA did a national telephone survey.

The most common reason people gave for running a red light is that they are in a rush or trying to save time. People also run red lights out of frustration with traffic congestion, which is something we deal with in New York City every single day. Some do it just for the thrill or rush of adrenaline.

The analysis says that almost everyone knows running a red life is not safe. Still, 48% of respondents say they ran a red light within the last 30 days.

Red-light running crashes are almost always avoidable. In most situations, all a driver has to do is follow the traffic rules and slow down when a traffic light turns yellow. Still, responsibility is less clear in other crashes involving a red light, like in instances where a driver performs a legal right on red turn.

If you were injured or a loved one died in a crash involving a red-light runner or some other form of negligence, you can and should consult a lawyer as soon as possible to explore your legal options. You may be entitled to compensation for your current and future medical expenses, lost wages, and any other applicable losses.

At Giampa Law, our attorneys serve as aggressive advocates for the injured and always fight to build compelling cases for maximum compensation.

To see what we can do for you, contact us today to schedule a free consultation with an experienced NYC car accident lawyer.