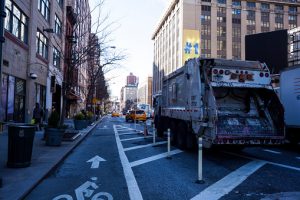 There are over 200 private waste management companies operating within New York City — an enormous number compared to your average city. This means there are well over a thousand trucks navigating the crowded streets of the city, at all times of the day. New Yorkers should be confident that these trucks meet safety standards.

Unfortunately, this is not always the case. In fact, a concerning number of trucks from various companies regularly fail inspections. Trucks that fail to meet the minimum standards in an inspection pose a risk to people's lives and well-being.

This was the case over the summer in Brooklyn, when a wheel flew off of a garbage truck, went over the traffic median, and struck another driver. The driver, Robert Martinez, was killed. He was a 64-year-old civilian employee of the NYPD.

This same truck had 16 unanswered summonses for unspecified safety violations. The New Jersey company that owns it, Century Waste, has a history of failing to meet safety standards. They have failed 65 percent of inspections in the last two years, including a truck that was taken off the road in February for “missing/loose” wheel fasteners.

A Garbage Truck Company's Failure to Uphold Their Duty of Care

Century Waste is not the only company with a shaky safety record. Roughly 53 percent of trucks from the top 50 private waste companies have failed government inspections. By comparison, the national rate of failed inspections is only 21 percent. In addition, 14 of these companies haven’t been inspected in the past two years.

The Business Integrity Commission (BIC) manages the licenses of garbage companies operating in the city. They have stated that their authority to revoke a license on the basis of safety is limited, but they're drafting legislation to expand that authority. This response has been met with criticism from politicians and safety groups, however. They cite New York’s administrative code governing the agency’s authority and responsibilities, which includes “compliance with safety and health measures” as one of the commission’s “powers and duties.”

Another section of the code gives the agency the power to “immediately suspend” a license or registration if a company “creates an imminent danger to life or property.” The BIC has been accused of weak regulation regarding the safety of garbage trucks. Whether or not that is true, the fact remains that something needs to be done to address this issue.

Garbage truck accidents can be far more complex than passenger vehicle accidents. There are usually more parties involved such as the driver's company, other companies, the trucking company's insurance, and even other motorists. If you were the victim of an accident involving a garbage truck, especially one that failed to meet safety standards, you deserve to have your rights upheld. With decades of experience and knowledge of New York's legal system, we know how to handle the most complex cases. Contact our office today.